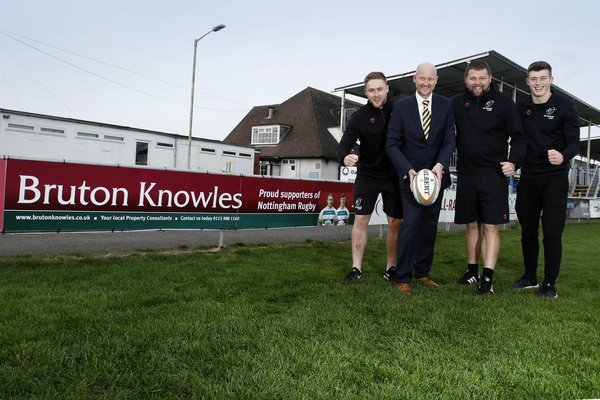 Bruton Knowles has made its biggest commercial commitment to date, renewing its sponsorship package with Nottingham Rugby Club for the 2018/19 season as part of its ongoing nationwide sponsorship programme.

The leading property consultancy announced in September that it was the largest commercial sponsor to date for Cheltenham Tigers Rugby Club. Now, having supported Nottingham Rugby Club for three years, Bruton Knowles is enhancing its ties to the community by continuing to support the Championship league team.

Bruton Knowles has always been committed to keeping close ties to regions it operates in, by sponsoring local sports clubs, which need support and funding and are pivotal in giving back to their community.

Nottingham Rugby Club has always played an integral part in encouraging younger people into sport within its community and as part of the sponsorship package, Bruton Knowles will be able to partner with Southwell Rugby Club’s Under 16’s team to provide its players with free Nottingham Rugby Club match tickets.

Bruton Knowles Managing Partner, James Bailey, is based at the property consultancy’s Nottingham office. James commented: “We may be a national consultancy with 12 offices across the UK but we also know that our local communities are important and sit at the heart of our work.

“The nationwide sponsorship programme helps us to support local sports clubs and community organisations but also opens up new business opportunities. With a new captain taking the helm for the 2018/19 season, Nottingham Rugby Club has a very exciting season ahead and it’s great that we are a part of it.”

Steve Smith, Chief Operating Officer, added: “Having Bruton Knowles as “Part of The Team” is brilliant for Nottingham Rugby Club. Not only have the team supported us as a sponsor, they are regularly cheering on the Green and Whites from the side-lines down at The Bay.

“Without companies like Bruton Knowles supporting us, we would not be able to compete in the Championship and their continued help is greatly appreciated by everyone involved at the club.”