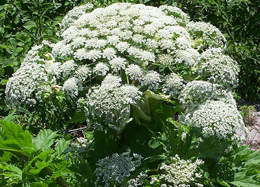 Landowners are being warned about the implications of not dealing with the increased issue of giant hogweed growing on their land.

That’s the view of Caroline Jones from the Cardiff office of Bruton Knowles who believes a rise in the number of public liability cases will occur unless the invasive plant is not dealt with properly.

Caroline says homeowners could be fined up to £2,500 under the new rules of The Anti-Social Behaviour Crime & Policing Act 2014 - which now classes failing to control highly invasive plants as ‘anti-social behaviour.’ The fines for businesses can be up to a massive £20,000 and is in addition to new EU regulations are due to come into force next year.

Also known as giant cow parsley, Giant Hogweed can grow up to five metres tall. Found mostly alongside footpaths and riverbanks the sap is toxic and can cause very severe burns and scars.

Caroline said: “Giant Hogweed has hit the headlines a lot this summer with more cases being reported than ever before indicating the increased problem the plant has brought.  The first UK public liability case has now hit the courts.”

The issue of members of the public coming into contact with the plant has also been heightened following a ruling on historic public rights of ways that could see scores of people criss-crossing private land that wasn’t open to them before.

It follows a case that resurrected a legal ruling based on the wording of documents written 200 years ago.

The case hinged around the land commissioner charged with turning medieval fields and commons across hundreds of villages in the 1801 Inclosure Consolidation Act. The Act resulted in commonly owned large fields and farms turned into the patchwork of fields and farms that exist today.

Caroline added: “Our advice to any landowner is to first stop the Giant Hogweed plant from producing seeds. Seeds already present in the soil bank can be eliminated by excavating and disposing affected soil, but this can be very expensive.

“Plants and seedlings can be killed quickly and cheaply by using a herbicide application of glyphosate or, in the case of mature plants, by cutting the root. This would then need to be monitored with if necessary further control measures.

“If the landowner is aware that the plant is present, then the affected area needs to be cordoned off with signs informing the public. The worst thing to do is nothing, otherwise it could result in a hefty fine.”

For further information contact Caroline Jones on 02920 028800 or This email address is being protected from spambots. You need JavaScript enabled to view it.