The latest RICS/RAU Rural Land Market Survey revealed that availability of farmland on the market continued to decline in the second half of 2017, with supply falling across both residential and commercial units.

In the West Midlands, supply of commercial units fell 44 per cent, while residential saw a   33 per cent decline over the six-month period.

In terms of demand, following a two-year period in which the results had pointed to a deteriorating backdrop, the H2 figures show a largely stable trend coming through. Demand for farmland, where its purpose is purely commercial, did continue to fall marginally. The West Midlands, however, witnessed a 22 per cent rise in demand for both commercial and residential farmland.

The survey’s transaction based measure of farmland prices (which includes a residential component where its value is estimated to be less than 50 per cent of the total) increased fractionally over the period to stand at £10,260 per acre. The survey’s opinion-based measure (a hypothetical estimate from surveyors of bare land prices) slipped a further         1.4 per cent during H2, leaving it down nearly eight per cent year on year.

Going forward, price expectations remain modestly negative, with a net balance of -13 per cent anticipating a decline in the year ahead.

Gareth Lay said: “As in the first half of 2017, the West Midlands is bucking the national trend, with land prices remaining the same or increasing, depending on the type of land. The scarcity of supply coupled with continuing demand is helping to maintain or push up prices.” 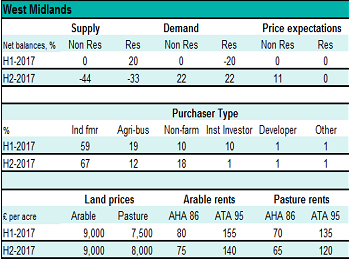